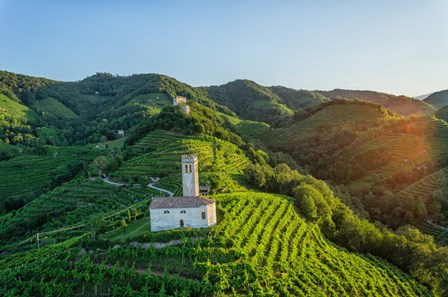 2008 marked the beginning of another historical moment for the green embroided hills of Conegliano Valdobbiadene.

In 2019 that dream came true, this stunning geographical area has finally been recognised globally as a region which requires protection and sustainability...

Conegliano and Valdobbiadene are located in Northern Italy in the Province of Treviso which is well known as the home of Pinarello, Benetton, Diadora, SIDI, Northwave and Rudy Project

Vine growing dates back to ancient Roman times where there is record of celebrations during harvest. San Venanzio Fortunato who was the Bishop of Poitiers (530-607) and from the area describes his home as "Quo Vineta Vernatur, Sub Monte Jugo Calvo, Quo Viror Umbrosus Tegit Sicca Metalla" (“an area where vines bud below the high mountains, and in which the lush greenery protects the more barren zones”)

King Henry III of Poland passed through this area in 1574, on his way to Paris to be crowned King of France, it was in Conegliano that he sourced the white wine which would continuously flow from the Fountain of Neptune.

The earliest written mention of 'Prosecco' was in 1754 by Aureliano Acanti  in his poem l Roccolo, Ditirambo and in 1772 Francesco Maria Malvolti linked Prosecco to Conegliano Valdobiadene.

In 1868 Count Marco Giulio Balbi Valier,  published a book about his vineyard where he identified one Prosecco vine which he claimed was superior to all varieties of Glera grape , known as “Prosecco Balbi”.

1876 was a significant one, not just for Prosecco, but for the wine industry in general, when The Conegliano School of Winemaking was founded, it was the first of its kind for Italy and leading the new wave of education that would go on to influence the work of many of the winemakers that the next century.

We are now in the 1900's... and innovation continues with the establishment of the Experimental Station for Viticulture in 1923, followed by the implementation of more distinct geographical boundaries in 1930, limiting production and ensuring a higher quality of all vintages. And as WWII came to an end, the 'Brotherhood of Prosecco' was founded, which in 1962 was renamed the 'Consortium for the Protection of Prosecco from Conegliano and Valdobbiadene' - both of these organisations strived to improve the Prosecco 'brand'.

In 1962 the first ever Sparkling Wine Exhibition was inaugurated in Valdobbiadene, followed by the opening of the Strada del Prosecco (Road of Prosecco) in 1966,  the first ever recognised sealed road in Italy which opened its doors to wine tourism which lead the way to Prosecco finally gaining DOC status in 1969 for the 15 communes between Conegliano and Valdobbiadene.

In the 1970''s experience was now building and one of the most important contributions to improving the quality of production was a series of books written by Prof. Tullio De Rosa. His texts, such as 'Tecnologia dei Vini Spumanti' has been studied by several generations of students and references the art of perfecting the Conegliano Valdobbiadene method of making sparkling wines.

The industry boomed through the 90's with exports growing and more land being assigned to growing the Glera grape and by 2003 the region was awarded the status of 'First Sparkling Wine District in Italy'. In 2004 the 'District’s Research Centre was founded' and finally in 2009 Conegliano Valdobbiadene became Italy’s 44th D.O.C.G.

Click here to read more about D.O.C and D.O.C.G.

On July 7, 2019 in Baku, Azerbaijan, the 43rd session of the World Heritage Committee unanimously voted the Prosecco Hills of Conegliano and Valdobbiadene to join the list of United Nations Educational, Scientific and Cultural Organization (UNESCO) World Heritage Sites

Tours which Visit The Prosecco Region

Bike in one hand, Jug of Prosecco in the other?? Why not!

We have several tours which travel through visiting the Prosecco Region, click here to read more

If you are looking for a more intense experience in the area, please do not hesitate to contact us: This email address is being protected from spambots. You need JavaScript enabled to view it.

Prosecco Tours are regularly treated as Custom Tours as to provide the most uinique experience in this very unique region.